Quite artistic and cute. Shot entirely with a phone, that’s the catch.

For all of you who missed this on Speedhunters, I just randomly digged it up again. That is one shop you can never get tired of. Definitely super clean and just looks like things are being done right. Wish they had a satellite center here in the US. Here, if I go to a shop to put on a coilover set up, they wouldn’t do so much as to align the damn thing. At Spoon they’ll align it, weight balance it and tune it for whatever it is that you are trying to do with the car, something I would love to have done to my car no matter what part I’m putting on.
Read the rest of the post here. It’s definitely a good read for those who are obsessive of detail, like me (at least with my cars and sneakers).
I need to get me some money, maybe I’ll just ship my car over and have them ship it back when they’re all done lol.
In case you haven’t yet noticed, I wouldn’t love Honda as much as I do if it wasn’t for tuners like this (and others like J’s Racing).

That is quite the serious little Civic.

If you have you’re 3D glasses that you never got rid of from the movies, now is the time to break em out. This video is insane, just as the Nurburgring is.
(if you don’t have any, you can turn the 3D off)
Hit the jump for a wallpaer of this years start.
END_OF_DOCUMENT_TOKEN_TO_BE_REPLACED

How the Honda’s Sittin 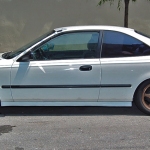 This is my progress haha. Torn between doing anything else to the car, or selling it and getting a newer car.

Man do I need me a Subaru, that sound is music to my ears.
Quoted from Subaru: “Subaru of America, Inc. has released a new YouTube video of the 2011 Subaru WRX STI setting an all-time course record for the historic Isle of Man TT Mountain Course. The 5 minute 25 second video highlights in graphic detail the speed and drama surrounding rally driver Mark Higgins’ lap that averaged 115.356 MPH. After the run, Higgins talks through the “moment” at Brey Hill when he momentarily loses, and then regains, control of the WRX STI at more than 150 MPH.

Driving a US specification 2011 Subaru WRX STI, Higgins achieved speeds of 162 MPH and a lapped time of 19 minutes 37 seconds over the 37-mile track, navigating more than 200 corners.

“This is one of the most daunting tracks I have ever driven, and the most terrifying,” said Higgins, a Manx native. “We were only able to get two practice runs and on our second practice I had the biggest “moment” of my career. We had a passenger on the run and so coming into Bray Hill at more than 150 MPH, the extra weight compressed the suspension more than on previous runs and shifted the Subaru to the left and then right as I corrected–it was a real tank slapper. The whole thing went by so quickly that we never slowed below 110 MPH, and then we were back on the power. It was amazing and the helicopter shots really show just how hairy it really was.”

The WRX STI was a production US spec car running a standard 305 HP turbocharged boxer engine. Some safety modifications were made. The Subaru was equipped with a Lifeline fire suppression system, Hockley Motorsports roll cage, motordrive competition seats, Mintex brake pads (but stock calipers and rotors), and a louder open exhaust to warn spectators of the on-coming car. The speed limiter was turned off to allow a higher maximum speed; off-the shelf Tien springs and dampers were added to accommodate the numerous high-speed jumps on the circuit, sending the WRX STI almost four feet off the ground. The car ran on street legal Pirelli P Zero Trofeo tires.”

Music to Relax Your Mind

You HAVE to hit the jump and listen to a few more.
END_OF_DOCUMENT_TOKEN_TO_BE_REPLACED

Damn it I want to know Japanese and own all the Hot Version DVDs!
Check parts 2, 3 and 4 after the jump.
END_OF_DOCUMENT_TOKEN_TO_BE_REPLACED 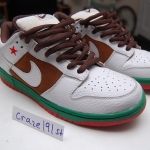 This marks the end of my sneaker splurge…for a while lol.

END_OF_DOCUMENT_TOKEN_TO_BE_REPLACED

I’ve been waiting for so long to get these. 😀
Sorry to those who are sick of seeing sneakers on here…but it is my blog 😛 lol.

Such a sick video. That car sounds amazing, I so wish I could be behind the wheel of something like that.

Super fresh. Maybe one day I’ll have the time to put something together like that.